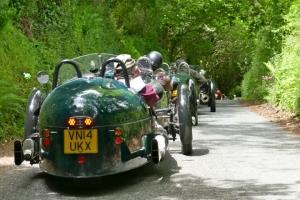 It is hard to believe that we have just held the sixth of this extremely popular event.

Moving around the country, with great hotels in superb settings and a relaxed social atmosphere is proving to be a winning formula. That we get the same regulars each year and a steady increase of newcomers with old and new Morgans is the aim. This year’s turnout of Mogs is another record for G&G and was just short of next year’s Isle of Man 2020 week which has 36 Mogs, old and new already booked.

The event started on the Thursday at the hotel was, a stunning location on the Teign Estuary. Relaxing on the terrace over a drink was a popular pastime and there was also a separate pub next door to give a change of scenery.

On Friday the troops were under orders to be at their Mogs for an 9.30 departure and remarkably they were. We set off in three groups on a scenic run up to Hay Tor for a photo shoot. Clearly some found it difficult to follow instructions and as most of us were leaving Hay Tor half a dozen stragglers came down the hill with lame excuses. 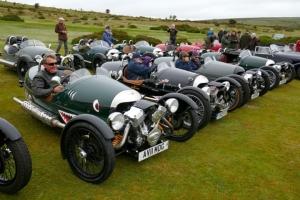 We carried on the run down into Bovey Tracey and The House of Marbles. An extremely interesting place and good coffee too. Here we were treated to a visit from Club Members, Oreste and Titti Bianchi plus friend Eleanor all the way from Milan, Italy. They had visited us the previous weekend and were on their way to Cornwall then, I told them about the G&G event and they decided to incorporate a visit on their way back from Cornwall. To say that they were impressed to see 35 Morgan’s was an understatement, they were amazed!

The scenic tour continued up towards Moretonhampstead where a problem of a landslide had closed the road and after a consultation with a local took a single-track road for several miles through the hills with superb scenery to get us back on track. The run continued up into Haldon Forest and the lunch stop at The American Diner.

The run continued down through Kenton to BerryBrook Morgan Dealers at Exminster. Sean, the owner has a very nice collection of steam engines plus Morgan cars for sale. He said he had never seen so many Morgan Three Wheelers in one go before. Visit over, we followed the coast road back to the hotel.

Friday evening dinner was followed by live music from Grouvecat, who was a great guitarist/singer. Even Rachel had a go at Karaoke with him, a great evening. 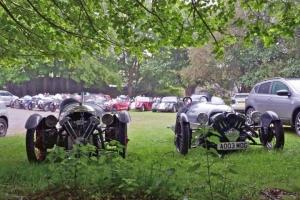 This time the group was led by Pete Clements, ably assisted by “Chuck” Berry as navigator, brother Ron ended up in the middle of the pack. Pete led the group on a spirited drive down to Buckfast Abbey where a fete was taking place.

This proved popular as the Abbey is so interesting and the grounds and fete gave an added dimension. As is usual with our events we always try to give people a chance to go off on their own to do whatever they fancy. Several did so but the main group decided to stick with the plan so we set off from Buckfast on the drive via Totnes to Dartmouth then on to the ferry to Kingswear then a further five miles into Brixham to satisfy Chris Golding’s nostalgia. To seafront fish and chips was added the Torbay Airshow with a great display of aircraft including the Red Arrows. Back to Kingsteignton for a visit to the Clements Ranch House where Pete and Ron were on hand to chat about the many vehicles and hybrid engines/vehicles in their garages. An enjoyable and varied day for all.

Saturday Evening Dinner is one for fun and frivolities. As well as a raffle with popular (and not so popular) prizes including G&G Awards, some wacky, to some lucky recipients. No logic to my choices. Well everyone said they enjoyed it!

Sunday morning and a slightly later departure for The Dartmoor Run. Once again, Pete Clements led group one and Ron led group two. They led the group across country to Buckfastleigh and The South Devon Steam Railway and an Autojumble. Then the light rain came in . . . . .

We led the way up onto Dartmoor in the SuperSports. The higher we got the thicker the mist and the heavier the rain. After a short stop at Dartmeet approaching Two Bridges it was decided to abandon the Dartmoor Tour and go straight to the lunch stop at Widecombe on the Moorwhich was dry! We were joined by some Pembleton owners at The Café on the Green in the centre. Excellent food and drink in a delightful setting.

Some decided to return to the hotel whilst the rest continued on for the final visit of the weekend, Moretonhampstead Motor Museum, a great little museum with a knowledgeable owner, Frank who gave us an interesting talk. Some of the ladies opted for coffee in the town. The run back to the hotel was in bright sunshine, time for a beer or two before dinner!

Monday morning and a later breakfast before we all said our goodbyes and headed for home.

It was good that former Chairman Adrian Murray-Leslie came for the weekend. Thanks also to Ted French and Roger Davies, locals who turned up for the drive outs plus special thanks to Pete and Ron for their input.

We loved the company of everyone who attended. The way you all mixed in and sat with as many different people as you could showed that our aim is succeeding in bringing old and new together. We intend to make sure it continues.

Thanks all of you for making this G&G even better than the last one.

4pm on the last Thursday in the month. Only 5 minutes off the M1 and A50. Lovely pub in a beautiful setting with good food and beer plus an basement room for us (when the[...]
View Calendar
A Morgan goes Around the Houses in Australia Golf on the tundra and a 5 speeder…
Scroll to top