Many thanks to Tony Quinn for this report and Dennis Astridge for the photos.

Six Morgans supported this event among a mix of motorbikes old and modern.  Encouragement for the competitors was provided by Nick Taylor and Richard Watkins who came along to spectate.  The weather was lovely, perhaps a little hot for dressing up in leathers, helmets and so on.

Ron and Pete Clements drove over 100 miles each way from Newton Abbot in their ‘new’ two speed beetlebacks.  Both have M type pattern bevel boxes.  Pete’s is powered by his extra-long stroke 1280cc MX4.  It has an ingenious synchromesh in place of the usual dog arrangement for engaging the drive sprockets on the cross shaft.  Ron’s engine is an interesting mix of JAP parts – 60 degree LTZ side-valve crankcases fitted with long stroke DTZ flywheels topped off with dog eared water cooled cylinders and heads, giving a very torquey 1220cc or thereabouts.

Not unexpectedly Bill Tuer made Morgan FTD with an elapsed time over the quarter mile of 14.55 seconds.  His terminal speed was an impressive 99.3mph.  Greg Bibby took second place in his similar JAP 8/80 racer with 15.17, but was 6mph slower over the line.  It just shows how fast you have to go to gain that extra half a second.

Clements Bros had a good day despite being hampered by only two speeds and having a wide gap between the gears to give a good cruising speed for road use.  Both improved steadily with Pete coming out on top with 17.57 against Ron’s 18.96.

Tony Quinn’s blue Super Sports beat its existing Touring Modified record with 17.47 on the first run, so he was a happy bunny.  However it was disappointing not to improve over the subsequent five runs.  Daughter Cathy in her F2 was pleased to beat her previous best by half a second to record 18.57.

Unfortunately Wroughton is an expensive venue for the VMCC Sprint Section to hire.  The Ministry charges £2,500 for the day.  Taking into account the other expenses such as medics, toilets, ACU permit fees and riders’ and officials’ insurance, the organisers needed about 90 entries to break even.  With under 60 entries on the day, they inevitably lost money.  As a consequence the future of a straight line sprint at Wroughton next year is uncertain.

Thanks to Dennis Astridge for the photos. To view the photo gallery, click on any of the photos to bring up a larger version. You can scroll forwards and backwards using the [,] and [.] keys. Press [ESC] or click on the image to Exit. 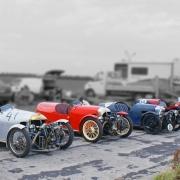 Four three wheelers at rest in the paddock 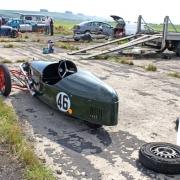 Greg Bibby\’s car at rest. No, that’s not his rear wheel you can see behind the car! 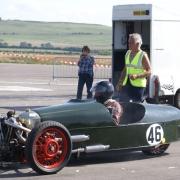 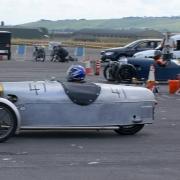 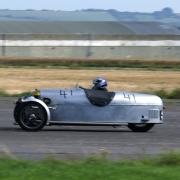 Pete Clements at speed. In an effort to keep the car’s weight down, Pete has decided paint is unnecessary. 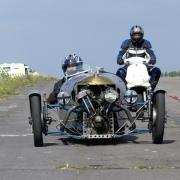 Pete Clements returning to paddock, with outrider to ward off the fans 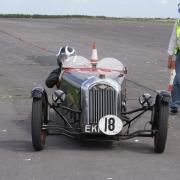 Cathy Quinn Returns to the paddock 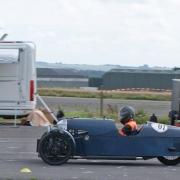 Tony leaves the line. Note the chap with the bird’s eye view 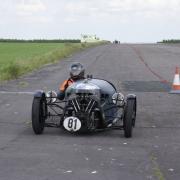 Tony on the return to the paddock