The Words – from Sue Darbyshire:

Only 2 Morgans entered this most traditional of hill climbs and the day started with beautiful sunshine befitting a summer’s day in the English countryside. However, as with most English summer days it had a small sting in the tail in the form of a massive thunderstorm in the mid afternoon just before the racing car classes had their first run.
In years gone by Alistair Rew and Sue Darbyshire, competing with Alistair’s modified Aero and Sue’s F4 have been know to finish an event with only one hundredth of a second separating their times and this event saw them renewing this close competition when they posted practice times  of 40.63 and 40.61 respectively.
The aforementioned storm and assorted other delays meant that only one practice run was had by many and only one timed run was had by all. The track was very wet and although the sun had come out again there was a strange blanket of steam rising off the course which resulted in a need to lift off the throttle half way up the hill, compromising the run time, although it did affect everyone. The final, and only times were 44.26 to Sue and 46.28 to Alistair on a very rain affected course. Phil Dobbin in the Morgan /GN special Salome failed to post a time due to a number of issues over the course of the day. Unfortunately the MAC/VSCC must look at their strategy for this event to ensure that it is more successful next year.
Back to Top
The Hill: 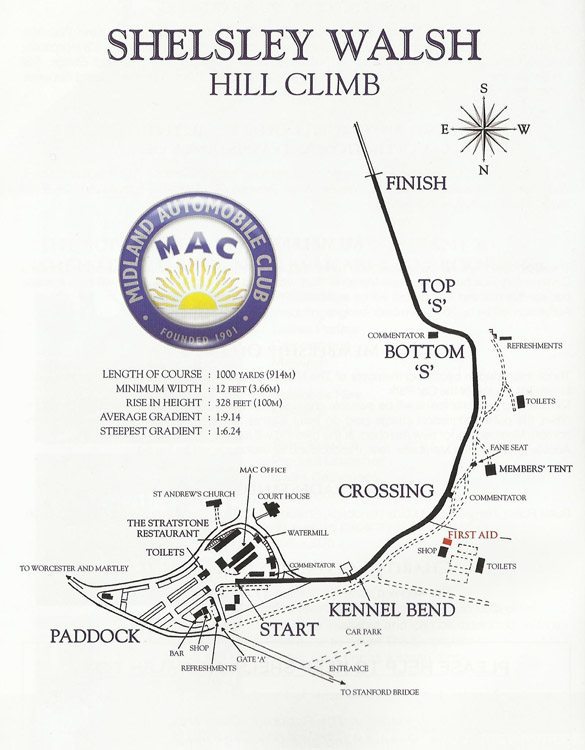 Back to Top
Photos:
Great photos from Dennis Rushton.