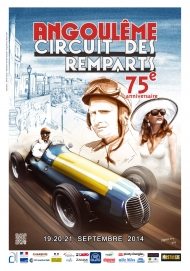 The Words: From Pete Clews

The Circuit Des Remparts is a real street circuit with stone walls, a conker tree and some slippery pedestrian crossings; fortunately without pedestrians on race day!  It is a high profile spectacle with big screens, a large crowd and a wonderful atmosphere in the city.  There were rows of expensive cars lining the city roads and the pedestrian shopping streets and the cafes were crowded with enthusiastic people.  Chas Reynolds and Pete Clews were the 2 Morgans entered in the JP Wimille Race for vintage cars.

The paddock at Angoulême is the car park for the Marie and is very crowded so much so that the two Morgans were billeted along with several MGs and an Austin 7 in just 2 parking spaces!  We all got to know each other well.  Scrutineering was another hurdle as both our helmets were deemed unsuitable and the scrutineer was concerned that there is no seat in the F-Type but all was eventually sorted and we settled down to enjoying the atmosphere around the city.

Race day was warm and sunny and the practice for the JP Wimille Vintage race was not until 11 am.  After being briefed and breathalysed we did some 17 laps practice.  The result was that Chas qualified second and the F-Type 8th.  There were some potentially fast cars, a very low slung Austin 7 with an MG engine and supposedly 90 bhp as well as Rob Cobden’s Riley with 2 stage supercharging and numerous MGs making up a grid of 17.

The race took place in the late afternoon, as the shadows began to lengthen, and looked like a runaway victory for the fast Riley until after 17 of the 18 laps fate robbed it of a halfshaft allowing Chas to take first place; his third victory at Angoulême in three visits.  Your Comp Sec managed to finish 6th in the F-type ahead of many of the supposedly “fast” cars.

The Photos: From Jon Mark and Sue Clews