The MTWC Sporting AGM /Dinner took place on Saturday 17th November and was attended by about 60 members of the club. There were no proposals submitted to the meeting which began at 2.15 pm and closed at 4.15 pm. To read the minutes of the Sporting AGM, click here.

Charles Reynolds resigned as Eligibility Secretary. His place will be filled by Jonathan Garside and Dave Hodgson working together to administer the club’s Green Card Eligibility System for competing cars. The meeting elected them both unanimously. Jonathan will be the contact for administration of the scheme. His contact details are:

The Calendar for MTWC Challenge Series events is not finalised at present but the date for MTWC Curborough will be Sunday 23rd June 2013.

The Sporting trophies were awarded at the Dinner with the MTWC Challenge Trophy going to Tony Quinn with Class awards to Hamish Bibby/Katie Bain (Racing), Tony/Lily Quinn (Touring Mod) and Chris/Ann Harfield (Standard). Full results are shown below. 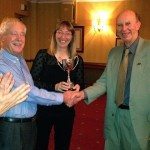 The Dennis Rogers Trophy for Outstanding achievement in a Morgan went to Florian and Sybille Kunz for their achievement in the Salzburg GP. It was accepted on their behalf by Sue Darbyshire and Gary Caroline.

The Thursday Club Trophies were presented to Greg Bibby for the fastest Morgan and Tony Quinn for fastest catalogue engined car.

Our thanks go to Lesley Reynolds for organising the Dinner and to the Stonehouse Hotel for their organisation, help and service.