It was billed as a Christmas Lunch but it turned into more of a party! Thirty eight club members sat down to lunch at The Kilton Inn, Hoo Green near Knutsford. No sooner had they settled down than Group Organiser, Mike Guess handed out little tasks. That’s how it all started. Mike takes up the story:

As a challenge to those who are spending years rebuilding and maintaining their Morgans, North-West Group members attending their Christmas Lunch were asked to build a Morgan during the festivities. Each of six tables was provided  with a kit of parts created by G.O. Mike Guess strongly supported by Ken Dovaston. Following instructions and armed with Superglue, diners were challenged to create a fully rolling “Morgan” to see who could go the furthest from a downhill start. Crikey, they are a competitive lot. Like a gang of 10 year-olds. Cheating by adding weight for downhill acceleration was countered by extra drag on the carpet. The result was a close run thing between the Summerscales, Reynolds, Gill team and (inevitably) the Tuer, Bibby, Green team. Who won? Who cares?
Table 5 had a rather torrid time. Their Morgan was built with the front suspension upside down. This resulted in such minimal ground clearance that the car stopped on the downhill ramp!
And the lunch? Great food, great company, great service – albeit a little slow but no-one noticed, they were too busy building Morgans.
Well done Mike (and Ken) and anyone else who was involved in the organisation.
Ace Sporting photographer, Dennis Rushton, was on hand to take photos. Mike Guess provided even more: 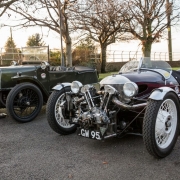 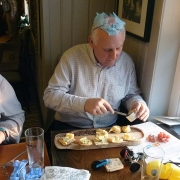 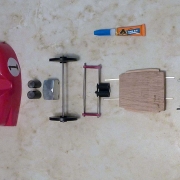 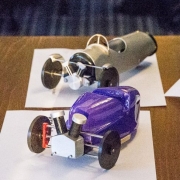 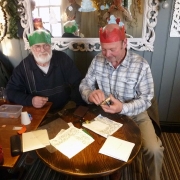 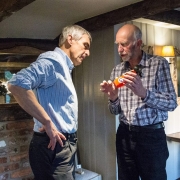 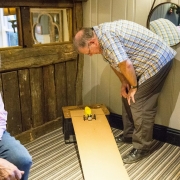 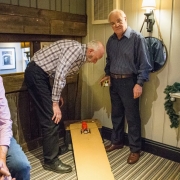 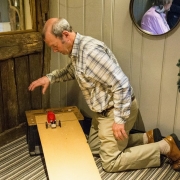 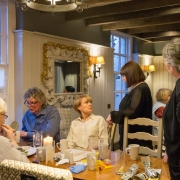 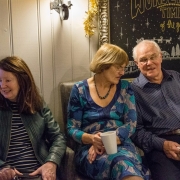 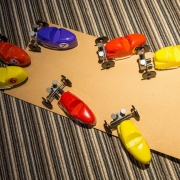 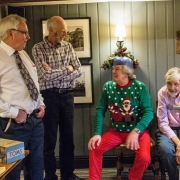