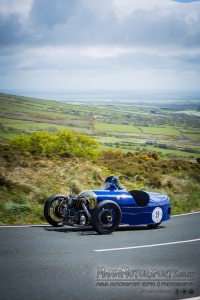 The Manx Classic has been run for more than twenty years, and the Manx Motor Racing Club has a great track record of producing exciting and friendly motorsport events for classic and sports cars. Two Morgan Three Wheelers were entered for the event.

A predicted dip in temperature for the week of the Manx Classic still made the event warmer than last year’s event and we were treated to some lovely sunshine as well, although the wind was chilly.

Only two Morgans competed this year, my own and my old F type racer in the capable hands of our great friend Nancy Thomas. We were still trying to sort out the issues with the Super Aero resulting from our complete re-build after my Mallory crash last September. Silverstone had been a little problematic as we had silly failures which took us out but which were easily resolved. However we had no great expectations from the car and were simply hoping for a solid event with finishes if possible!

For the first time in many years the Sloc was back on the schedule of three hillclimbs as it had been resurfaced. Only in the Isle of Man could a road in the middle of nowhere, going from nowhere to nowhere be resurfaced, strangely for the length of the hillclimb course only.

The second hillclimb was Creg Willeys which is on the TT course at Glen Helen and the final one was Llergys Frissel at Ramsey, incorporating the famous Ramsey hairpin, Waterworks and Gooseneck, all such evocative corners from TT history.

Nancy had a great event, going faster this year than last year and improving her times on all events. She had a minor problem at the end of day three when water from a morning shower got in the track rod ends and caused a bit of wheel wobble but she was well up to dealing with it and it barely slowed her down.

My own fortunes are best glossed over but suffice to say despite casting various parts of my car at the scenery we got reasonable times on all three hills and finished second pre 41 overall in the wake of one of the rocket ship Fraser Nashes of the Smith family. This was no mean achievement as we had spent a LOT of time working on the car between runs and at night between events and this was recognised by the organisers when they presented George with the Nil Desperandum award at the prize giving for his considerable effort in keeping the car running for three days.

Located in the south of the Island, just north of Port Erin, the Sloc course is a real challenge for competitors and also provides the added bonus of providing spectators with safe viewing for the full length of the track. The spectacular views across the whole of the south east of the island are an added bonus. On a clear day North Wales can be seen in the distance.
From the bottom paddock competitors and spectators are able to see 75 per cent of the course which runs for a distance of 1.06 miles (1700 metres) and climbs at an average of 1 in 14, rising by 421.26 feet (128.4 metres.)

Creg Willey’s runs through Glen Helen, north of Ballig Bridge on the TT course, before negotiating Creg Willey’s hill, past Sarah’s Cottage and on to Lambfell, finishing on the Cronk-y-Voddy straight. The course is approx 1.45 miles.

Lhergy Frissell Hillclimb takes the world-famous TT course out of Ramsey, through the famous Ramsey Hairpin, Waterworks and Gooseneck corners. The longest hillclimb in Great Britain, it encorporates part of the original Gordon Bennett Eliminating Trails course of 1904 and the original (car) TT course, from 1905 onwards. The course is approx 1.48 miles.

We’re very grateful to Darren at Mann Motorsports for permission to use some of his superb photos. You’ll see lots more photos from the event if you click here. Sue Darbyshire found time to take a couple of photos too. 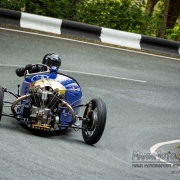 Sue peels away at the tyre while rounding the corner 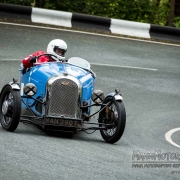 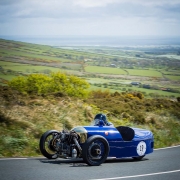 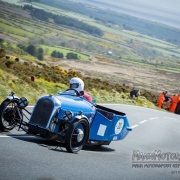 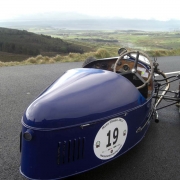 Sue took this picture at the top of the hill 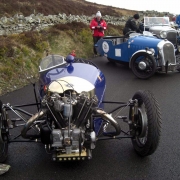 Full results for Thursday, Friday and Saturday below (download as PDF’s):

Results from Day One of the Manx Classic:  The Sloc Hillclimb 2017   [PDF] updated