A double meeting at this lovely venue in the South West of England. Saturday was hosted by the 500 Owners Association while the VSCC ran the Sunday meeting. Two days of competition in pleasant weather but rather variable track conditions.

Situated in the picturesque grounds of Wiscombe House, the course offers an idyllic setting. Featuring open parkland and winding woodland the hairpins and camber changes proves a challenging hill for any competent driver.

Wiscombe Park is a long way south – not far from Exeter and this explains the limited entry to the event.

A total of four Morgan Three Wheelers competed over the two days. Sue Darbyshire was out in the blue two-speeder racer and up against Chas. Reynolds in his green Super Sports three-speeder. Cathy and Tony Quinn did battle in their MX2 powered cars.

Wiscombe Park hillclimb holds a special place in my heart being my first competition event way back in April 1970. Several visits later it was great to return for the 500 OA meeting. Lily passengered me in the green Touring Modified Super Sports whilst Cathy drove the two speed racer with Tom alongside. Conditions were a bit slippery for the first practice but the track soon dried out. Both MX2 powered Morgans ran faultlessly all day (phew!), so we spent the non-competing time wandering around the grassy paddock chatting to other competitors. Sue Darbyshire and Chas Reynolds were running in the MSA class without passengers. Sue’s line through the sharp blind left hander at The Gate was a delight to behold as she strove to close the gap on Chas, but just failed to beat his fastest time on the Saturday. As I was loading up to come home a pair of spectators commented on what they thought was my engine blow up, but it turned out that it was the other green Morgan. Commiserations, Chas. Been there, done it too.

Cathy’s target was to get below 60 seconds which she achieved on her last run whilst I was happy to improve steadily. Our best times were: Cathy/Tom 59.71secs and Tony/Lily 55.64secs. Unfortunately whilst the published results show all four runs for every other competitor they show only the first timed runs for our two Morgans in the ACU class. Luckily we took the printouts that were available at the finishing area.

A few words from Sue Darbyshire:

There were two meetings at Wiscombe , the 500 Owners Association on Saturday and VSCC on Sunday.

Chas Reynolds ran with no passenger as did myself, with Tony and Lily Quinn and Cathy Quinn and Tom Cowley running under ACU regulations.

The course was very slippery early on and dried very slowly under the trees. Chas. finished the best of the Morgans with a 50.64. I had a bump on the Isle of Man and spent Saturday getting my confidence back.

On VSCC day, Sunday. conditions were mostly dry from the start and my best run was a 49.54 which was good enough for third fastest overall time. I had a great battle with Charlie Martin who beat me on the last run of the day to Vintage FTD.

And from Chas. Reynolds:

Yes, it was a good Wiscombe (only the Saturday for me, I didn’t do VSCC Sunday) but I had an engine  problem halfway up on my last run chasing 3rd place 0.5 second away in the form of a Bugatti T51. Sue was getting back into her stride to finish in 5th place in the class.
The Hill 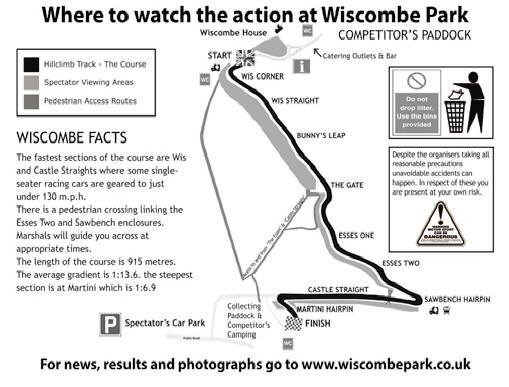 Click on the photo of Chas Reynolds to see a gallery of great photos from Dr. Boggis. 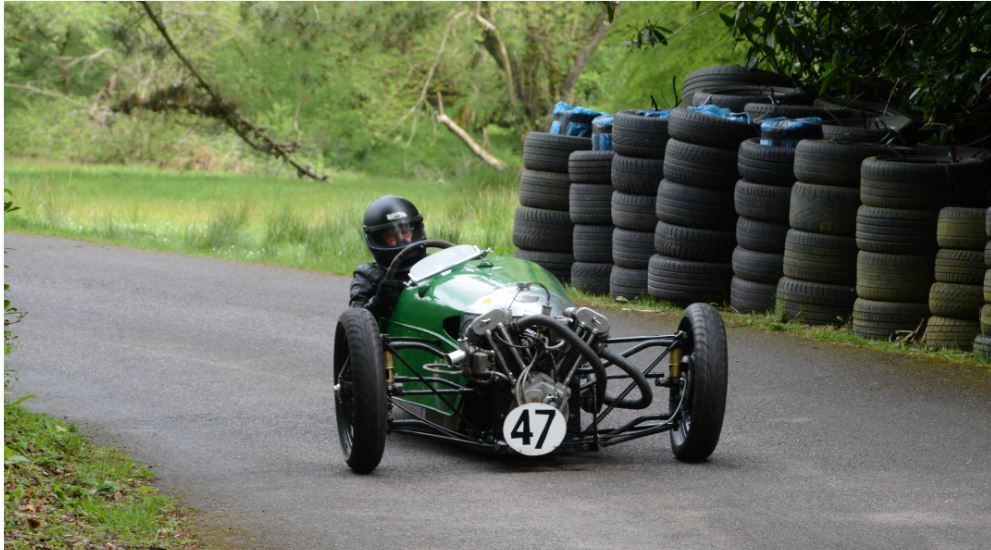 And here’s what it looks like from a Subaru.

Results of classes featuring Morgan Three Wheelers are shown below. For the full results of the weekend – click here. For the VSCC Event Results – click here.

A battle of the mighty J.A.Ps between Sue Darbyshire and Chas. Reynolds. The Quinn Family formed Class X with their 2 MX2 powered cars:

Cathy’s and Tony’s best times not included in the results above:

Sue Darbyshire was the only Morgain Three Wheeler. She was pipped to the class win by Charlie Martin in the RIP Morgan four=wheeled Special: