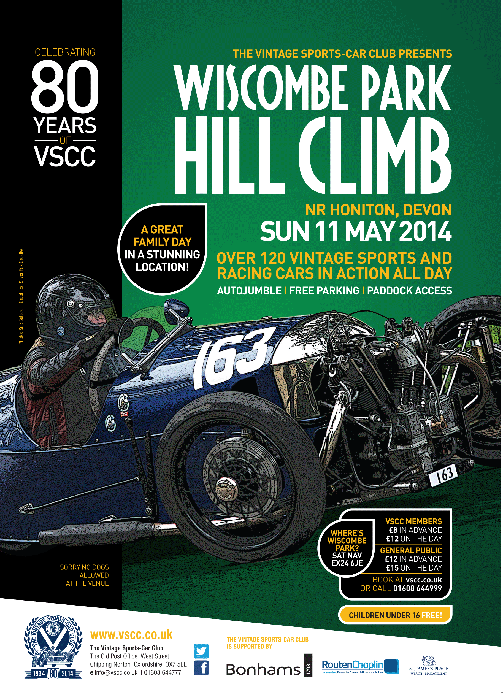 Sue Darbyshire on the Poster!

About the Hill: Wiscombe House, adjacent to the competitors paddock, was built in 1820 by the Gordon family and was purchased by Richard and Bunny Chichester in 1953. Major Richard Chichester had befriended Major Charles Lambton, an officer in the Coldstream Guards, and upon the latter’s first visit to Wiscombe Park the duo decided that it would be ideal for a hill climb course. After much planning, organisation and consultation, involving Denis ‘Jenks’ Jenkinson, the first hill climb meeting was staged on August 24th 1958. One of the organising clubs was the Yeovil car Club and the drivers paid thirty shillings (£1.50) to enter. At this time the course finished at the Sawbench hairpin. Castle Staright and the Martini Hairpin were added during the winter of 1960/61. The following year saw the first visit of the National R.A.C. Championship.The hill is about 1000 yards long.

All took part in Class 14 – Pre 1941 Racing Cars 1101-1500cc. Sue Darbyshire finished 2nd Vintage, just a second or so off the Vintage FTD by Charlie Martin in his four-wheeled Morgan Special. Full results below. Click on the image for a closer look.

And a note from Barbara Caroline:

“Trying to counter Sue’s good performance at this venue, Barbara fed her selected high calorie chocolate bars which backfired as the extra body mass improved her traction.  Gary, meantime was very rusty, nothing to do with the relentless rain, and on the first timed run did a tidy 360 degree at Sawbench. The red flags however, did not prevent Gary from returning down the hill and meeting Sue half way up on her run. The Marshals were not happy!”

We’re assuming it was Barbara’s plan that backfired rather than the chocolate bars.

Many thanks to Don Stringer for the photos. To view the photo gallery, click on any of the photos to bring up a larger version. You can scroll forwards and backwards clicking on “Next” and “Prev”. Press [ESC] or click on the image to Exit.