VSCC Spring Start heralded the opening of the historic motor racing season on 12/13 April. With races catering for all types of Pre- and Post-war Racing and Sports-Cars, there was machinery on display to satisfy all interests.

Not so much spring as the last throes of winter with a penetrating ‘breeze’ whipping across the old aerodrome.  Five Morgans huddled together, the Darbyshires’ 2 cars, Bob Towell’s 200 mile Aero, Duncan Wood Super Aero and the return of Gary Caroline’s Super Aero.

Duncan had the best of days with two second places, one in a 5 lap handicap and the other in race 6 which won him the Itala Trophy for fastest car under 1500cc.  Gary Caroline came home 5th in the same race.  Sue Darbyshire retired from race 3 after a plug blew apart but had better luck in the Fox and Nichols Trophy Race where she finished 4th and 1st on handicap.  Bob Towell’s 200 mile Aero has recovered its reliability and he entered 2 races and finished both.

Sue Darbyshire and Duncan Wood were entered. Unfortunately, Sue had a “DNF” but Duncan went on to finish 2nd to Lawson’s Riley Special, less than 1 second behind the winner.

Sue was out again, this time in the Road Car She finsihed 4th but 1st on handicap.

Duncan and Gary were entered. Again, Duncan was second and picked up the GP Itala Trophy. Gary finished 5th, just over a second behind Chris Williams’ Napier Bentley.

Bob unfortunately finished well down the field at the end of a busy day. To quote Bob: “At least I completed more laps that day than in the whole of last season. I had decided before Silverstone that I would not do any more circuit racing unless Red Bull or McLaren called.”.

All in all, a good day for our members who were waving the three wheeler flag (and front wheels) to good effect. You can view the full results from the VSCC just by clicking here.

Many thanks to Dennis Rushton for the photos. To view the photo gallery, click on any of the photos to bring up a larger version. You can scroll forwards and backwards using the [,] and [.] keys. Press [ESC] or click on the image to Exit. 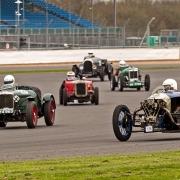 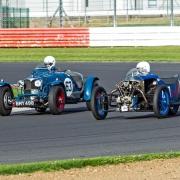 Bob Towell runs wide, allowing the Riley Kestrel Special to nip through on the inside. 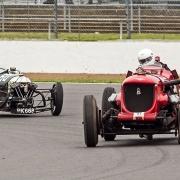 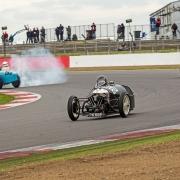 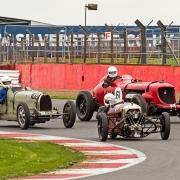 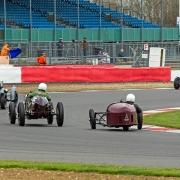 The marshal waves the blue flag to let other competitors know that Duncan Wood is weaving his way through. 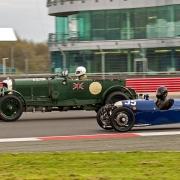 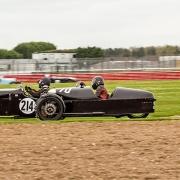