“The gem in the crown of summer Vintage Sports-Car Club events, 250 Pre-war sports and racing cars were in action over the weekend at the historic hill climb venue in Gloucestershire. The ultimate VSCC weekend; there is no other event that sums up the ethos of The Vintage Sports-Car Club because of the relaxed atmosphere, superb cars, hard competition, great company and a superb location.”

Five members in three wheelers entered the event. The competition was close between the regular racers. With a best time of 46.65 secs, Sue Darbyshire claimed 2nd Vintage, beating Alistair Rew  by 3/100 of a second! Gary Caroline was less than a second behind Sue. Bob Towell’s best time was actually his first practice run. Maybe he scared himself? Maxine Fack drove the original looking Super Aero which has the body originally fitted to Henry Laird’s car “Yellow”. Maxine only recorded times for practice runs.

Here are the results (Click on the image to enlarge):

Here are a few photos, thanks as usual to Dennis Rushton. To view the photo gallery, click on any of the photos to bring up a larger version. You can scroll forwards and backwards using the [,] and [.] keys. Press [ESC] or click on the image to Exit. 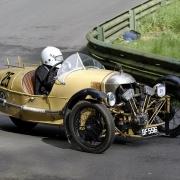 Maxine Fack. The body used on this car was originally fitted to what became Henry Laird’s “Yellow” 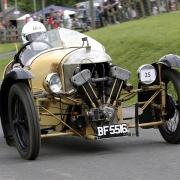 Maxine Fack. Is this a steering activated headlamp? 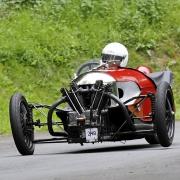 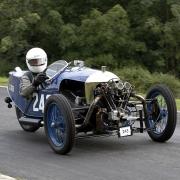 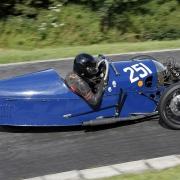 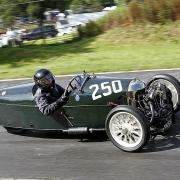