Round 2 of the 2016 Morgan Three Wheeler Club Challenge Series took place in suitably challenging conditions at Oulton Park. Sue Darbyshire had entered her 2 speeder in a VSCC event and came 3rd out of 32 starters.

The VSCC hosted the event and we were given Race 1 to start the proceedings. Not just racing, a chance to meet up with old friends too.

Saturday’s event followed what is fast becoming a VSCC tradition, not just last practice, first race but more importantly rain. That said, it does make things more exciting. The rain started while we waited in the assembly area and by the time we left the pit lane you needed a boat.

The VSCC gave us 6 laps qualifying and 6 of the 11 entrants stayed for it all. There wasn’t much grip and Chas Reynolds succumbed to what he thought was a piston seizing but turned out to be an electrical problem on lap 2. Iain Stewart completed 5 laps before he felt a piston tighten and headed back for the paddock.  Hamish decided 4 laps was enough after claiming Pole position with a 47.92 mph lap some 3 mph quicker than anyone else.  He and father Greg took the front row with Chas Reynolds and Iain Stewart very close together on the second.  Danny Hodgson and Austin Smith locked out the third row, Graham Sherwood and Tom Cowley the fourth, Pete Clews and Tony Pearson on the fifth and finally John and Jackie Scruton in their very first circuit race at the rear. Dave Say had started practice with Sue Darbyshire in the passenger seat but the misfire gremlins overtook them and they expired without completing a lap.

After a very short lunch the grid assembled and we were quickly ushered onto the track.  After all they wanted to get us out while it was raining!  A false start followed when the starter followed MSA rules not ACU and the lap was red flagged. The start proper was thrilling.  Greg Bibby suffered failure of the pivot pin of his clutch pedal and didn’t move.  Pete Clews found a gap down the inside and was fourth by Old Hall corner behind Hamish, Chas Reynolds and Iain Stewart. By Cascades Tom Cowley with the Matchless on song had moved into 4th. Iain Stewart had his piston problem recur and retired on Lap 4 leaving the other three to take the podium places. Behind them Pete Clews and Danny Hodgson were having a good ding dong!  Danny passed Pete going into Shell hairpin on lap 2 and lost the place at Hislops (“Hizzy’s”) chicane only for them to swap places again on lap 3 and to come up Clay Hill side by side to the delight of the watching spectators and Marshals. Danny crossed the line a few seconds ahead after Pete had a moment (or two) at Hizzy’s.

Behind these 2 F-Types came the 5 speeders. Graham Sherwood who had qualified well found his extra Stage 2 power difficult to transmit to the wet tarmac and lost out to both Austin Smith and the jubilant John and Jackie Scruton. Austin crossed the line the first of the 5 Speeders and the only one to stay on the blackstuff after John Scruton spun off at the bottom of Cascades. John kept the engine turning and recovered well to stay ahead of Graham. In amongst this mix was Tony Pearson in the Hodgson TM F-type who finished behind Austin but ahead of the other 5 Speeders.

It was a very enjoyable race and then as usual the rain stopped!!

Click on the results for a closer look. For the Full Results for the meeting, click here. Take a look at the results for Race 4 and you’ll see that Sue Darbyshire came a brilliant 3rd in the Bill Phillips Trophy Race out of 32 starters. 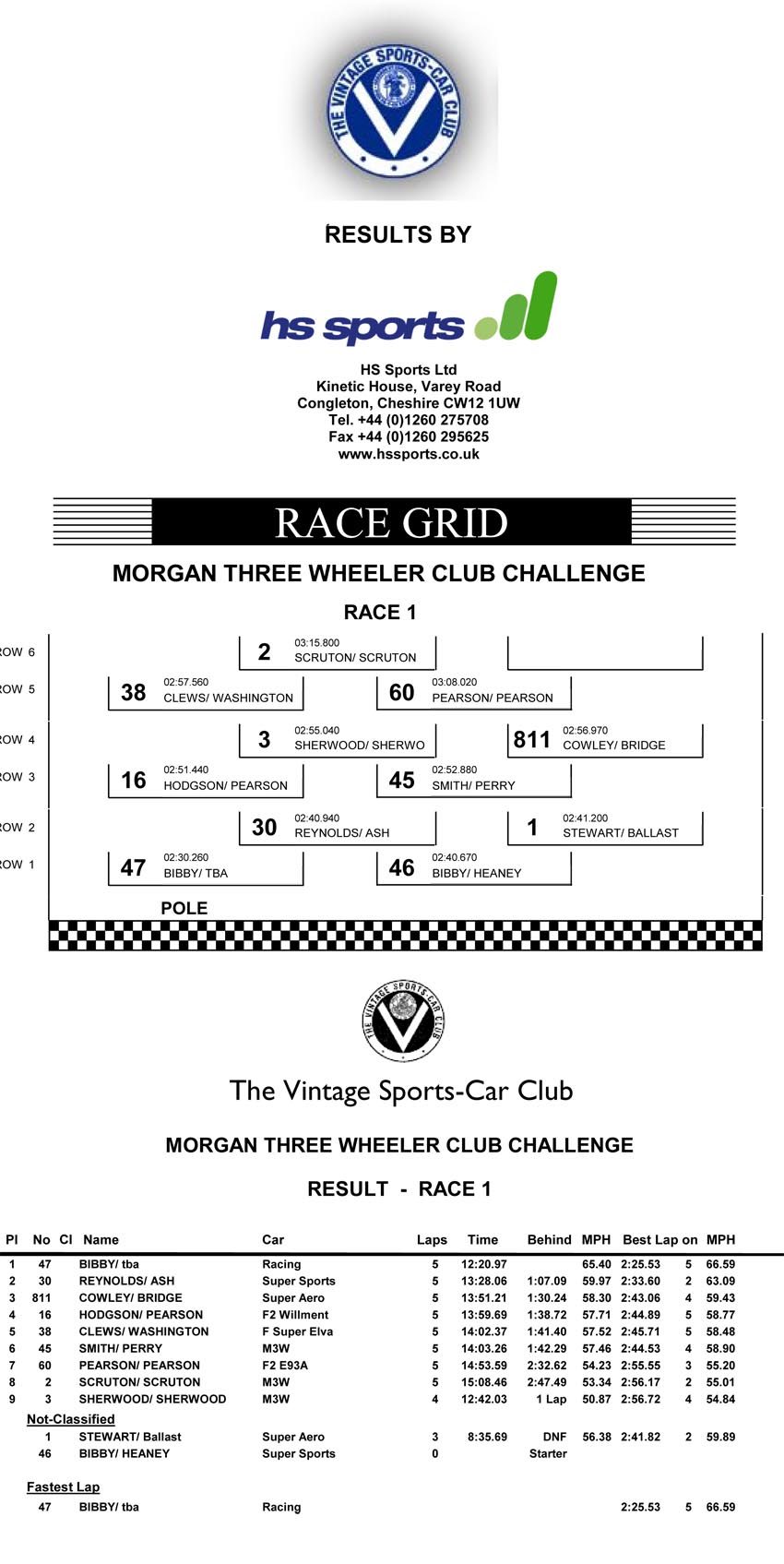