“As in previous years, the VSCC heralded the end to the Hill Climb season with their ever popular Loton Park event. Set within the confines of the estate’s picturesque deer park, the 1475 yards course is great challenge for car and machine, and competitors got two practice runs on Saturday and two timed runs towards the competition on Sunday. The highlight for many is Saturday evening’s traditional Hog Roast organised by our loyal band of local members. With plenty of ale and on-site camping available, the event is truly one of the most social on the calendar.”

The Words, from Sue Darbyshire and Iain Stewart:

Sue: I only know about my own personal battle for Class 14 honours with Iain Stewart and Alistair Rew. I am still smiling today….it is a very rare occasion when I can beat Iain Stewart fair and square, even if it is only one tenth of a second!

I think Hannah did OK but was hampered by a misfiring Morgan. Steve Lister failed on both runs due to a broken throttle cable.

Iain: It was a very good entry for the 1100cc to 1500cc Racing class and was super competitive throughout the entire field. Saturday practice was wet in the morning and dry in the afternoon. The Sunday timed runs were dry all day.

What took me by surprise on my first timed run at Museum was the amount of air I got under the car when I took off over that hump. By the time I landed there was insufficient braking distance for the following tight curve. Its a shame I went grass cutting there – so near the end, as that run had posted the quickest class sector times all the way up the hill. All the Morgans performed  very well and were just beaten by Peter Candy in his very fast Riley with 0.17 sec separating the first 3 finishers. Fortunately – my class record of 64.13 sec set in year 2000 is still intact.
back to top
The Hill:
click on the map for a closer look 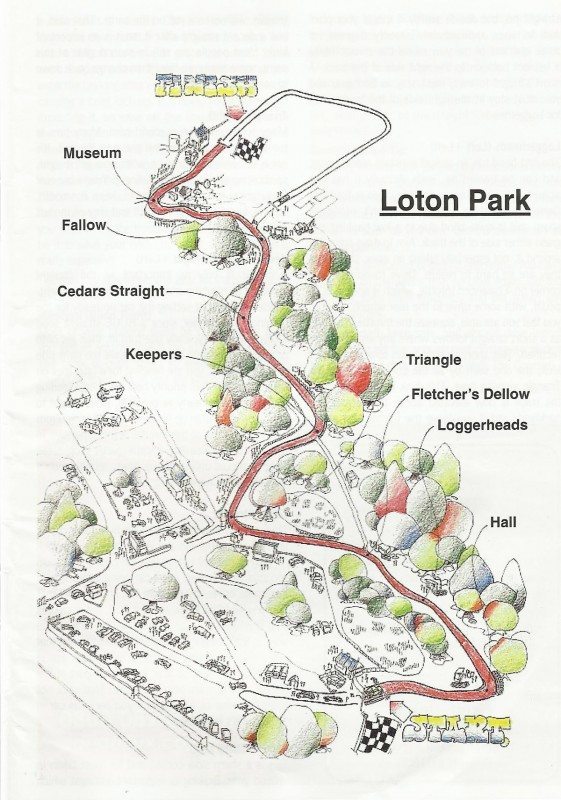 back to top
The Photos:
From Dennis Rushton.

back to top
The Results:
click here for Full Results. Morgan Three Wheelers were in Classes 13 & 14 (Page 7).
back to top