Rounds 5 & 6 of the Morgan Three Wheeler Club Challenge Series and Round 6 of the Thursday Club Championship were contested on Saturday/Sunday 15th & 16th August at Darley Moor. A great spectator circuit – nowhere will you get closer to the action.

Your scribe arrived early on Saturday morning in his Morgan having had a fantastic run over from North east Cheshire through Buxton over the Peak District to just south of Ashbourne.

There were three races listed each day for the Morgans, two for B3 cyclecars and sidecar based 3 wheelers and one purely for Morgans competing in the Morgan Three Wheeler Club Challenge Series.

Eleven Morgans were entered in the first Challenge Series race according to the programme, but a late entry was Sue Darbyshire in the blue Super Aero making twelve in all. Chas Pilbeam had a problem with scrutineering and was not allowed to race. The two 5 speeders of Graham Sherwood (touring modified) and Austin Smith (standard) made their second track racing appearance of the year. The race started with ten on the grid as Tony Pearson had not had sufficient time to investigate a mysterious loss of oil pressure in his E93A which had occurred in the earlier B3 race. Hamish Bibby driving Bill Tuer’s car, was passengered not by Maggie Tuer, but Sophie Timlin who was also passengering for Bill Tuer in the same car in the B3 races. Hamish leapt into an immediate lead in this 7 lap race followed by dad Greg and Sue Darbyshire, Sue’s car started to misfire in the last few laps which was diagnosed as ignition problems, but she pressed on to the finish. Graham Sherwood was going well in 4th the 5 speeder and they finished in that order. Following them home were the F Types of Pete Clews, Dave and Danny Hodgson, Dave Poplar and bringing up the rear but the only entry in the standard class was Chris Harfield in his F Super with a blown head gasket. His car wheezed across the line having completed 5 laps.  The one non finisher was Austin Smith who had the ECU fail on his 5 speeder, oh the wonders of modern technology!

The second Challenge Series race on Sunday saw only seven coming to the start. Charles Pilbeam had done some remedial work and he was allowed to start and Chris Harfield had made repairs. The 5 speeders were missing as were Tony Pearson and Pete Clews. The results were as per the first race with a win for Hamish Bibby, followed by dad Greg and Sue Darbyshire then Danny and Dave Hodgson in their respective touring mod and racing class cars with the final finisher being Chas Pilbeam.  Chris Harfield failed to complete lap 1.

The first B3 race on Saturday saw 5 Morgans entered in this 6 lap event with Bill Tuer/Sophie Timlin and Greg Bibby/Vicki White in their 8/80 powered machines dicing with two MRE sidecars and they finished 2nd and 3rd overall. Bill Tuer had overtaken the fastest sidecar, but was blocked at the hairpin on the last lap by a spinning Tony Pearson and the sidecar sneaked in front. They were followed by Dave Hodgson/Ann Harfield in the racing F Type, Dave Poplar/Ballast and Tony and Verity Pearson.

The second B3 race on the Saturday had Bill Tuer leading from start to finish followed by Greg Bibby and Sue Darbyshire.  But this time Sue was going really well and sneaked up on Greg slowly but surely catching him to the extent that Sue was just a car’s length (or three hundredths of a second) behind at the finish, a close run thing. Pete Clews had a monumental blow up on the last lap the engine being literally split asunder, but he managed to coast over the line in a cascade of engine parts and hot oil. More head scratching, and lots of work ahead.

On Sunday both races saw the faster Morgans dicing with the rapid MRE sidecars with Bill Tuer taking a 1st and a 2nd and Greg a 3rd and a 4th. Sue Darbyshire was 5th in the 1st race but did not enter the 2nd. The other Morgans were those of Dave Hodgson Tony Pearson and Chas Pilbeam. Danny Hodgson raced the Buckland in all the B3 races over the weekend.

We then had a cracking run back with the exception of a little gear linkage problem followed by Steve Uprichard in his MX5 who assisted us in the gear selection repairs and the weather remained kind.

From Dennis Rushton and Steve Uprichard. The photos cover 3 races on Saturday which explains how Bill Tuer and Hamish Bibby are driving the same car!

Graham Sherwood in his 5 speeder. His first outing at Darley Moor:

These are the results for the MTWC Challenge Series Races (click on a result list for a closer look). 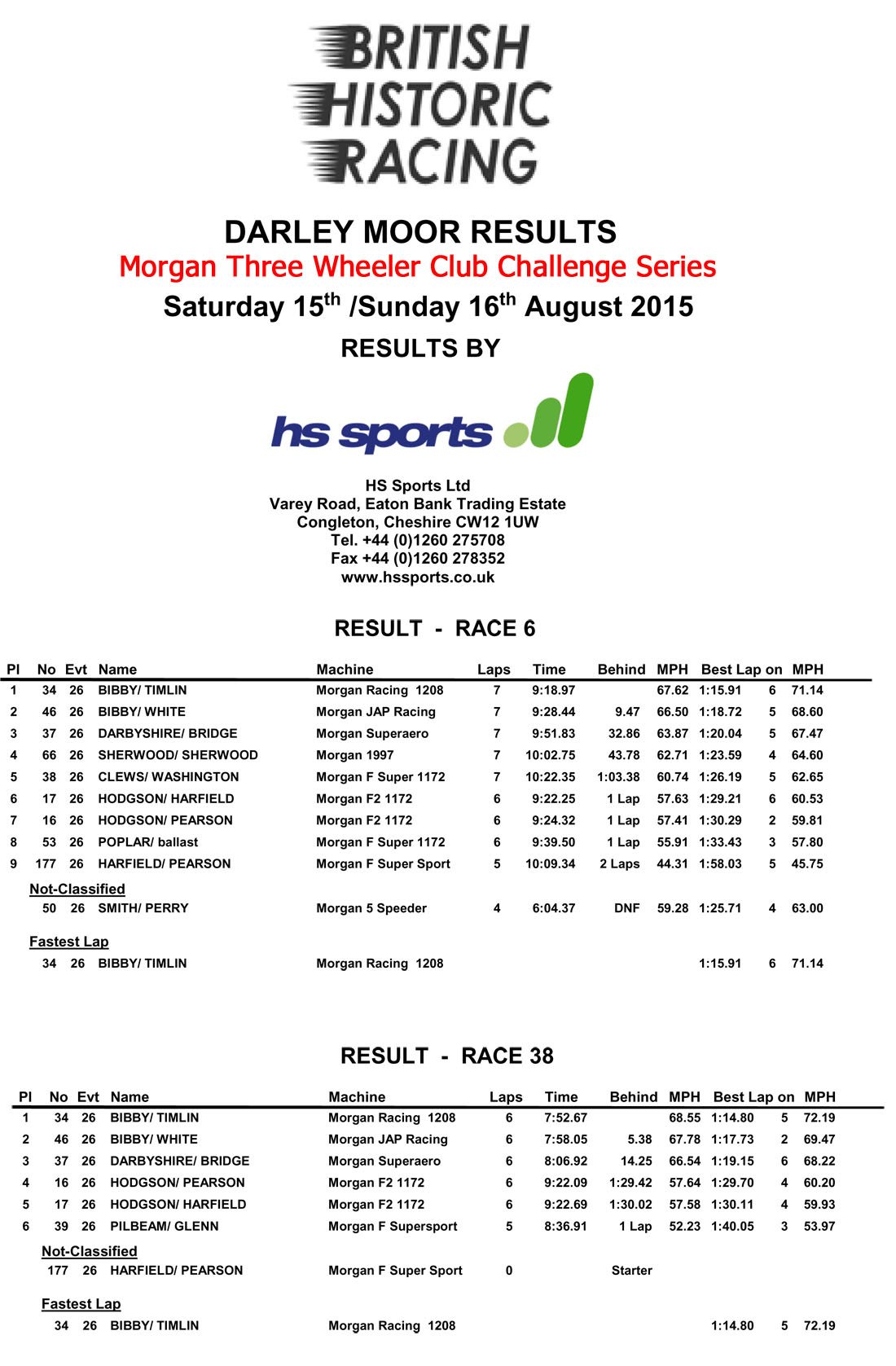