British Historic racing have supported the Morgan Three Wheeler Club’s racing for almost 50 years and we were proud to be supporting their 50th Anniversary Meeting at Cadwell.

We had been allocated a section of the paddock which allowed us all to be together and yours truly arrived on Thursday for the 3 day celebration followed by Bill and Maggie Tuer with the remainder of the drivers, passengers and supporters arriving during Friday.  We assembled a gazebo and thanks to the people who had brought old photos, Bulletins and a parcel of recent Bulletins from Mrs Trellis we had our base.  Friday we sat around and watched the parades of old bikes.

Eleven Morgans were entered in the 2 Challenge races and the races against the BEARS sidecars.  There were many other club members entered on vintage bikes including Ewan Cameron on a 1926 Brough Superior SS100 and Grant Sellars on a 1934 Norton CS1, also plenty of club members calling in along with a group of 5 Speeders who came to support us.  It was good to see them all and to talk to many of the bike fraternity who came to look.

Saturday dawned absolutely clear and sunny and Race 4 against the BEARS resulted in a win for Hamish Bibby and Paula Heaney with Bill and Maggie Tuer starting from the back of the large grid and giving a masterclass as they worked their way through the field.  Morgan Casualties were Chas Reynolds and Steve Ash who pulled off to prevent damage as the JAP tightened up and Tony and Verity Pearson whose F2 overheated.

Race 10, the first Challenge Race was held in the assembly area for a long time as recovery teams brought in numerous disabled bikes and as we waited the rain began to fall gently. We  jokingly blamed Austin Smith who has the ability to change the suspension settings on his 5 Speeder to suit the conditions and had changed it several times as he prepared for the race!  By the time the race started it was raining and the track was wet.  Grid positions are drawn from a hat, Danny Hodgson and Bronte Pearson won the lottery and started from pole.  Bill and Maggie Tuer started from the back of the grid and again worked their way through the field to second only 2 tenths of a second behind Hamish racing his dad’s car.  Austin Smith and Julia Perry finished 8th behind the racing F-Types.  After the race the rain stopped!

Saturday evening was party time as over 30 club members, Becky’s parents and other competitors celebrated Becky Washington’s ?? birthday.  The candles were blown out, the fizz bubbled and conversation drifted from topic to topic until a late hour for those of us over 60.

Sunday was cloudy and it was just before lunch when Race 24 took place against the BEARS.  It was a full grid again and some furious racing and this time Hamish failed to finish after his rear tyre began to melt.  Bill Tuer, again starting from the back clawed his way to 3rd place while Nigel and Sarah Challis and myself and Becky has ferocious race with Roly Mattam in the Mogvin and a fast BMW outfit with places changing several times before Nigel managed to use his 8/80 power to pull away from the other 3 who battled to the end.  Tony Pearson had a lonely race as Chloe and Charles Pilbeam had withdrawn after a coming together with one of the BEARS on Saturday which resulted in a broken front hub.  Chas Reynolds engine did seize and he was forced to withdraw on lap 4.

Race 30, the 2nd Challenge Race had only 9 starters with Austin Smith on pole and Bill Tuer again starting from the back.  It was an unexpected race with first Hamish pulling off at Mansfield on lap 3 when the clutch plate exploded damaging the chassis and hitting Hamish as it left the car.  On lap 4 Bill pulled off at the top of the Gooseneck with a broken magneto cap leaving Tom Cowley/Maggie Bridge and Nigel Challis fighting to the line.  it was Nigel’s race leaving him ecstatic with his first win.  Behind Tom was Danny Hodgson, Austin Smith and yours truly followed by Tony Pearson and Cathy Quinn.

It had been a memorable weekend and our thanks go to the Officials and Marshals of BHR.  Thanks also to those who helped pack away the gazebo while we waited for Sue to return from her marshalling duties on Hall Bends. 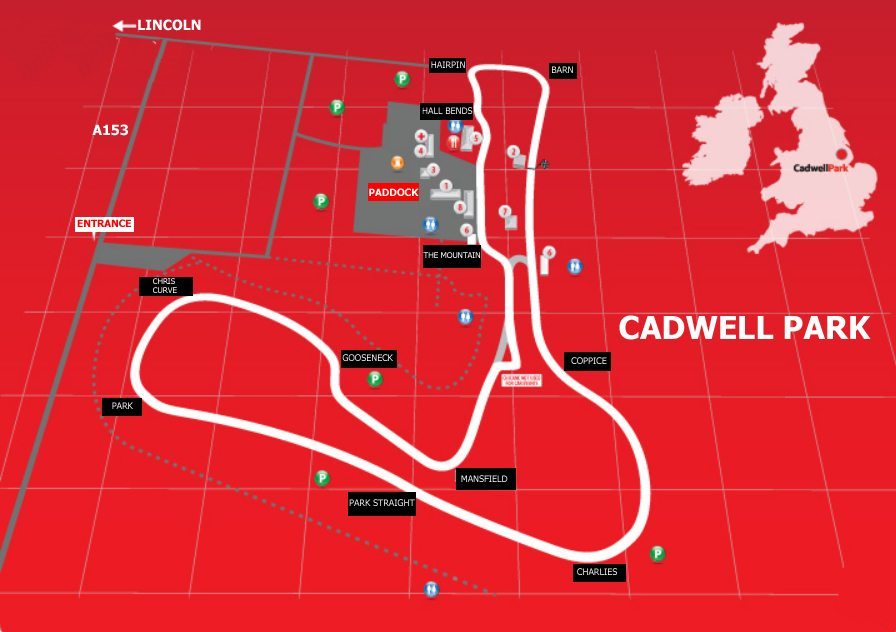 We’re grateful to Neil Kirby for these excellent photos. For more of Neil’s photos, click here. Neil’s photos were taken from various vantage points including The Mountain, Hall Bends, Hairpin and bus stop chicane throughout the weekend in the dry and the wet.

Results of the Challenge Series Races are shown below. For Full Results of all events, click here. Morgan Three Wheelers figured in Races 4, 10, 24 and 30. 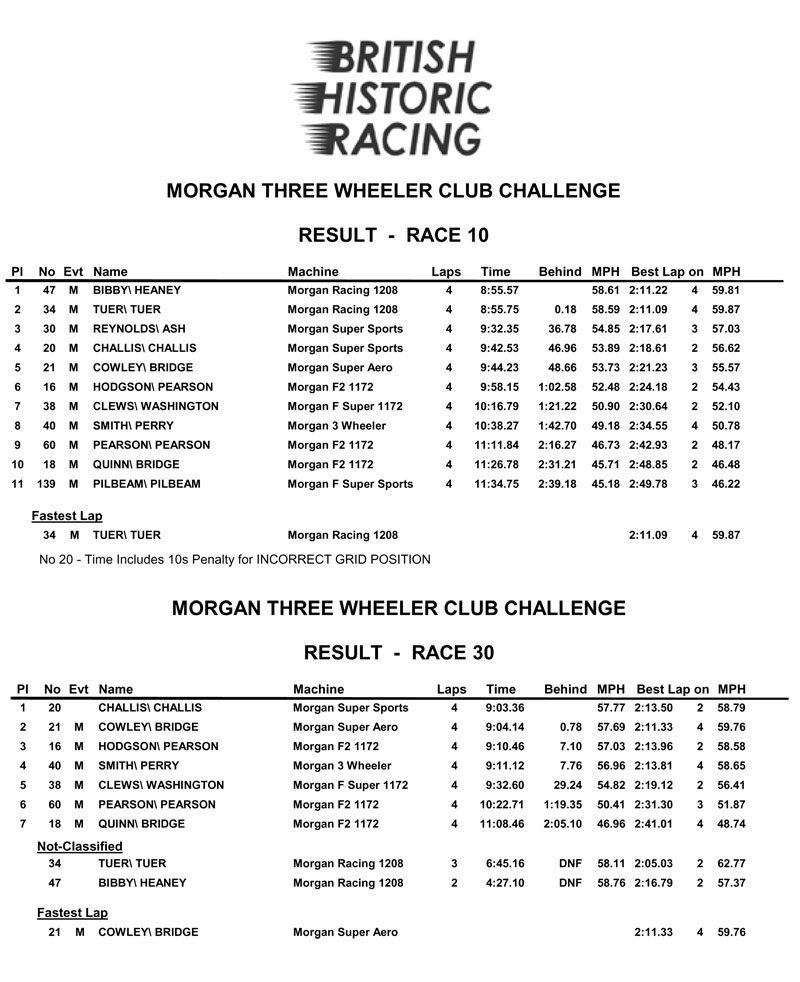