A report from Pete (the ploughman) Clews.

Schwanenstadt is a lovely town about 50 miles north of Salzburg and Bill and Maggie Tuer and Pete and Sue Clews made the Oldtimer Grand Prix there part of their holidays.

The second race saw Bill having a close race despite being up against Yamaha, Suzuki and Honda outfits from the late 1970’s as well as the BMW’s. He did very well to finish 3rd and it is always surprising to see how well a 1932 Morgan does against such opposition. Pete had a plan to get ahead of the BMW but like all the best laid plans of mice and men it came to pieces in the cornfield and although he regained the track he finished back where he started in 7th.

At the prize giving ceremony Pete and Sue found themselves on the podium having come 3rd in the Regularity which is a kind of handicap they run in Austria.

All the superb track (and field) photos  are published with the permission of Bernhard Egger.

To view the photo gallery, click on any of the photos to bring up a larger version. You can scroll forwards and backwards using the [,] and [.] keys. Press [ESC] or click on the image to Exit. 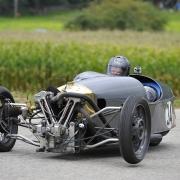 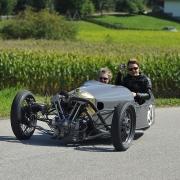 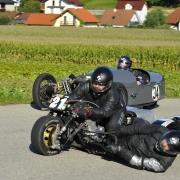 On Sunday, Bill used the dog-ear to good effect. 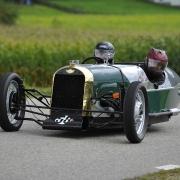 Sue Clews looks for a way past a pesky outfit. 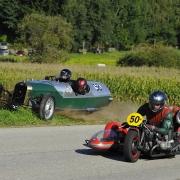 “OK Sue, I’ll sneak past on the outside”. 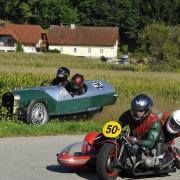 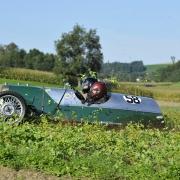 “Next left I think”. 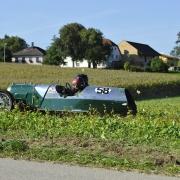 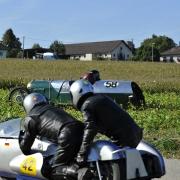 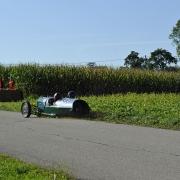 “Phew…… do think they noticed?” 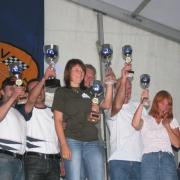 It was worth it in the end. Pete and Sue at the prize giving.