The paddock was packed with iconic French and Italian classic cars and supercars as well as a collection of our very own Morgan Three Wheelers. This was Round 3 of the MTWC Challenge Series 2016.

What a difference a week makes.  After the very soggy Oulton Park, Prescott was all sunshine and ice cream.  The camping area in the Orchard was reduced and it looked at one point as if there would have to be a stacker system.  Sixteen entries gathered on Sunday morning in Paddock J, Phil Bridge did his usual sterling job of scrutineering and all was ready.  Last year’s victims of the noise regulations had fitted new silencers, “whisperers” as Greg Bibby termed them, and all was well.  Practice went without incident except for Tony Pearson whose gearbox seized again, once is careless Tony but twice is downright negligent, still the ice cream was good, though it’s along way from Yorkshire for an ice cream.

Competition started after lunch and it was clear that Hamish Bibby was faster than anyone else; by the end of the afternoon he had Racing Class in the bag with a time of 53.80.  Chas Reynolds ran second with 55.69 and Greg Bibby who upset the C of C by missing a red flag, came back strongly and took third with 56.44.   Alistair Rew claimed fourth with 57.67 pushing Iain Stewart into fifth on 58.12

TM class  was led by Tony Quinn with 62.30 easily ahead of David Poplar’s new F2 on 66.89 followed by Cathy Quinn and Rob Pike a second apart.   It had been a good day and we had plenty of interest in the Morgans both from other competitors and spectators.  We were pleased to see so many club members coming to give their support. 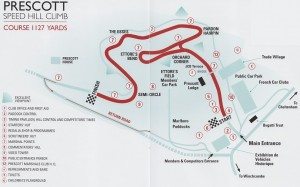