You are here: Home1 / Messerschmitt’s…… 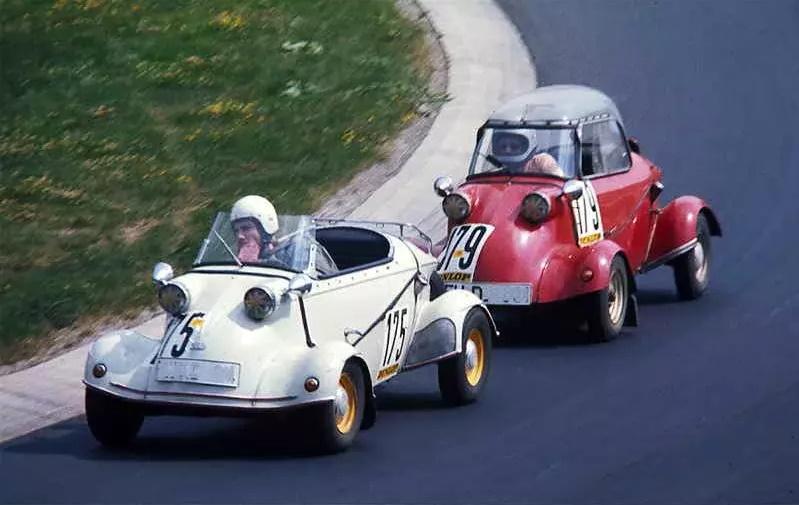 Someone made a comment about my previous ramblings that prompted more reminiscences:-

My father told me that he once sold a Messerschmitt Tiger, the four-wheeled performance version of the usual tandem-seat three-wheeler, and had to deliver it to someone who lived in the Cotswolds.  He said it was so small and quick that it was great fun to drive but a bit frightening.  I think they claimed an 80mph top speed and, with tiny little wheels and very little suspension, he said it was like driving a jet-propelled roller skate that jumped around on the road like a flea on a skillet.

When I was at university, I regularly used to park my motorcycle next to one that was owned by one of my mates.    He gave me a ride in it one day and once was enough.  Forward visibility for the passenger was very poor and it didn’t seem to steer but sort of dart about like a gnat.  The world passed by each side in a sort of blur.  I told him that it was like sitting down in the road and being dragged along by the heels but the worst was dodging between the busses on the Birmingham Inner Ring Road and looking up at their hubcaps as they whizzed past my ears.

My father also sold an Isetta to a local lady do-gooder who went around the area performing charitable works.  Unfortunately, she became notorious for her poor driving.    My father laughed when the Worcester Evening News did a series on local personalities and had a photo of her in the car with a headline, “This is Mrs. Yirrell, who goes around doing good turns in her Isetta bubblecar”.  He said that the one thing she didn’t do in it was good turns……..