OLD FOGUE’S POTTED BIKING HISTORY – from BC [Before Cyclecars] to present.

Acknowledgements to person or persons unknown for pics not including me lifted from the Interweb thingy.

PART 1 – THE DAWN OF ENLIGHTENMENT

Now, pushbikes are all very well – I’d flogged one round England and Wales for three weeks in the summer of 1960 – but oh! how much easier with an internal combustion engine. Wilting under my teenage persistence [but sadly never one for good taste in things self-propelled] Dad took me to see a Coventry Eagle autocycle advertised in the local paper. What a sleek marvel of pre-war ‘design’ [?], – ‘ladies bike’ frame, horizontal 98cc Villiers, outside flywheel and treadmill pedals. I hovered indecisively – not quite what I had in mind but rude to appear ungrateful. 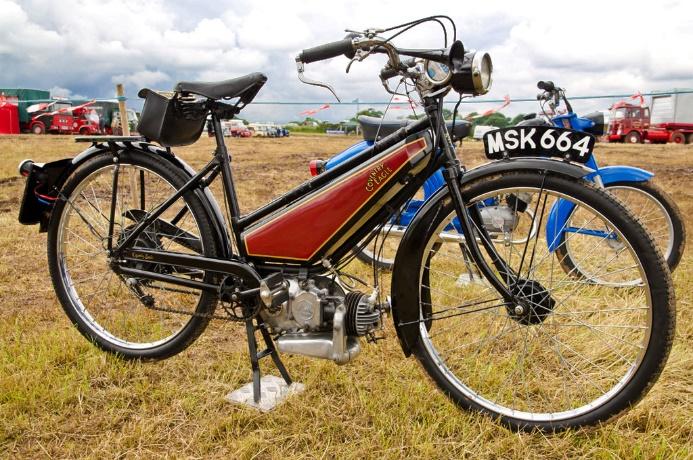 But it had that one irresistable feature – a MOTOR, which worked! ‘Yes please’ I heard myself say. Two quid changed hands and Petrolhead was born. Riding it home that evening, Dad narrowly escaping death at a T junction thinking that the brakes might actually work.

THE EAGLE HAS LANDED!

So what do we do? Pedal of course, furiously, drop the clutch, tweek the lever throttle and with a tinny crackle we launch down the street, flashing past suburban lace-curtained semi’s, man and machine as one – exhilaration! – two wheels AND a motor – 20, 25, then, could it be? [probably not] – 30 mph?

Come Monday morning, and off to school. Exciting or what? –  trailing a smokescreen past the local Girls’ High – such admiring glances from impressionable young ladies, and the satisfaction of overtaking the ancient Geography master pedalling his pushbike up the tree-lined school drive – Wow!

‘GIBBINS! See me after Assembly’. To his credit the headmaster didn’t so much mind me riding the first motorised two wheeler [I hesitate to call it a motorbike] to school, but was incensed that I was flaunting school regulations BY NOT WEARING MY SCHOOL CAP!! Protestations went unheeded so school cap it was, hastily donned each time I turned into the school drive.

But euphoria is short-lived. Nights drew in and lights were needed. Switching them on, I peered vainly to see if the bulb was actually lit. A 6W bulb in a tarnished reflector poses serious visibility problems even at pre-war moped speed. My pushbike dynamo produced better! [a potential solution here?] Adrenaline filled near misses with country hedges and urban moggies gave night riding an extra buzz, but the snags were plain. The single seat was bog all use for attracting the opposite sex and, anxious to avoid this indignity of treadmill starting, street-corner chats with my mates were impossible above the crackle of the tick-over as they disappeared into a noxious cloud of burnt 16:1 petroil [= an entire gallon of oil every 600 miles!]. I was losing friends fast! So my first love had to go.

As a plod my Dad knew the mechanics who serviced the Police bikes [at Frodshams, Warrington]. A 250 BSA had been part-exed. – a tenner, nearly in running order except for a knackered main bolt holding the lower frame, gearbox and centre stand [= virtually the whole bike] together. Dad rode it home. “It’s a bit wobbly – sure you can fix it?” Could I? – you bet!

Two bob well spent and an hour or two later the new bolt was in. I was astride a ’54 sprung frame 250 ohv C11G, a REAL motorbike! Now this WAS the biz, with that pillion seat too! What a puller – roaring down the local drag at over a ‘ton’, chin on tank, feet on rear pegs – Oh what you could do with 11 bhp and a shedload of imagination …. 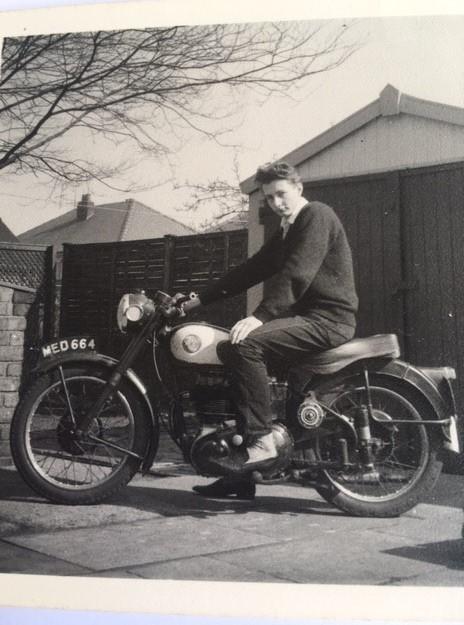 Not great lookers, either of them …

Not perfect mind you, with a dodgy alternator this lights problem was following me round. Old Joe Lucas  –  the ‘King of [Unexpected] Darkness’ was never far away! Plus a sprung frame rear suspension which didn’t – but liberal application of grease and a trip down a local farm track with my heaviest friend soon unsiezed it. A strange system I thought, little knowing that I would to come across it on a certain 3 wheeler sometime later …

But, full licence needed to take totty on board and find true love! With Highway Code swotted test day arrived. Examiner like a Russian spy in his gabardine Mac and trilby scurrying up and down back alleyways to spy on my riding the wet cobbled terraced streets. Arrggghhhh! – butt-clenching moment – the clutch is beginning to drag.The emergency stop’s done but by the time we reach the regulation ‘proceed at walking pace alongside me’ I’m desperately holding the bike back with the front brake and trying not to stall with half a fistful of throttle. Was I sweating! But Vladimir didn’t seem to notice and after a few questions uttered the magic words ‘Mr. Gibbins you have passed your test’ Wow – crumpet and burnups here we come!!

But what of the magic ‘ton’? – dream on! a measly 70 downhill with a following wind. And college loomed. Not reliable [or fast?] enough for daily trips to Liverpool the Beeza went into the local small ads. for 15 quid. But, enter a family friend – “Jeremy, a guy at the office is selling his bike, it’s bust and going cheap – you interested? -a Triumph something-or-other”. Hmmmmm?