Unfortunately, two of the four Morgan entrants for the Salopian Hillclimb Ascents I mentioned in a previous message have had to pull out so the organisers are keen to recruit other Morganists to take their places.

I understand Morgan quadrupeds as well as tripods may be considered eligible so get in touch if you think you might like an outing.  (Please see the attached for more details).   Please let me know if you are planning to take part.

Colin Bromley, who has bought the “Safari” Morgan, Brian Clutterbuck’s old racing car, is organising a run around Shropshire and is inviting three-wheelers to take part.

His message is as follows:-

A small group of us ran an event last year to commemorate the Hereford Speed Trials of 1925, as the event was well received we have continued event planning. The current situation has made our Welsh event impossible to even reccy properly, so it has fallen to me to plan an event around South Shropshire. The proposed route is around 75 miles, starting in Ludlow and finishing in, or near Bridgnorth (our finish point is not yet confirmed). The route runs around no less than 7 sections of road used for speed hill climbing, from the early 1900s through to 1925. One of these is Angel Bank, on the Ludlow side of Clee Hill, where in September 1921 HFS Morgan made FTD in 37.4 secs. The event takes the form of a tour, with a full Tulip Diagram type road book.

This year we are planning to run the event on Thursday 10th September and are limiting entries to 25 pre-war vehicles only, the event is not being publicised anywhere, and we already have 12 people who are suggesting they would like to take part. It would be great to have a few three wheelers there, I hope to take the Safari and David Cameron-Trevail is coming along with one of his Father’s machines.

As I am yet to meet any of the local people in the club I was wondering if you or anyone people known to you might like to take part? If you can think of anyone could you send me names and email addresses, which I can forward on to Steve Kay, who is in overall charge of things, so he can send out the formal invitation emails.

I am hoping to take part.  As there seem to be a limited number of places, please let me know asap if you would like to join in. 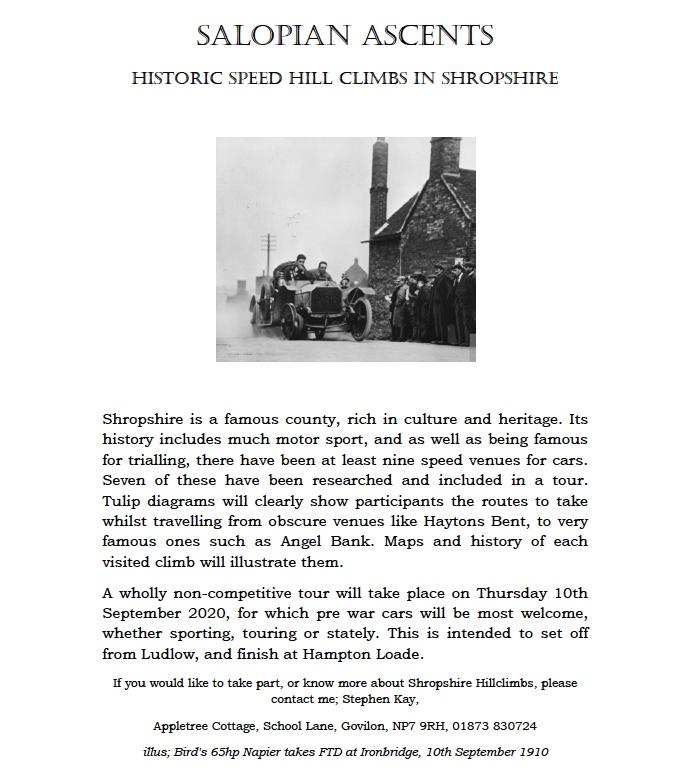 The August Bulletin is now online and waiting!

Normally meets on the third Thursday of every month but contact the Group Organiser if you want to confirm.  Note that to reach the car park you need to drive down the one way road[...]
View Calendar
The August Bulletin is now online and waiting!
Scroll to top