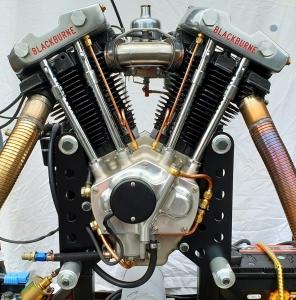 Some of you may have already seen the video of the engine (see blackburneengines.com) and are wondered what the hell is that, so to shine some light on the project. Here’s the story so far.

“I have been the owner and keen enthusiast of vintage motorcycles for many years but have always lusted after a Morgan 3 wheeler – not just any old Morgan but an air cooled overhead valve racer, but with my lack of garage space this has just been a dream.

Having been in motor racing for most of my life, with over thirty years as an engineer in F1. However, I am fast approaching retirement and have started to venture out on the odd away trip with my 1930 Scott race bike and it was a pilgrimage to Montlhéry in 2017 that changed everything.

On arrival at the ferry terminal in Portsmouth with my car + caravan with bike in the back. I was excited to see a whole gaggle of 3 wheelers lined up for the crossing. “Are you all off to Montlhéry?” I asked, “Of course” was the reply. I was surprised to learn that everyone drove down entered the event then drove back with not a 4×4 and trailer in sight. Later, on arrival at the circuit I noticed a large gathering of Morgans in the paddock, chairs and picnic tables out, with everyone gathered around drinking wine laughing and discussing the trip down and generally having a great time. The next day saw much of the same, the whole Morgan community having a fabulous time on and off the track.

This was the lightbulb moment and on my return to the UK I joined the MTWC.

I needed to make some space in the garage and start looking for a project, a fellow member of the VMCC and MTWC informed me that one of the most knowledgeable members of the MTWC George Darbyshire lived just over the hill from me and I should pay him a visit. So over a cup of tea with George and Sue and a lot of drooling over Sue’s two racers the reality started to sink in, this was not going to be as easy as I first thought. First George informed me that a rolling project is very hard to find so not leave it till retirement but to start looking now. About 10 to 15 grand should find me a start, but the engine is a whole different matter as if you want a big air cooled V-twin JAP you’re going to need deep pockets. “There is no cheap way of buying a motor” said George, “you can buy a dodgy second hand one and spend a fortune on rebuilding it, or pay a lot of money for a supposed good ‘un only to find you still have to spend big cash on a rebuild. Your best bet is a new one from Cameron Engineering” smiled George.

A visit to the Cameron website got my brain ticking, I saw all those fabulous JAP parts laid out on the table and on seeing the pair of beautiful crankcases it came to me that I was sure I had seen something like this before. A trawl through the internet and especially the site “A V-Twin Obsession” (a great petrol heads site) led me to the old ironhead sportster Harley engine, the 4 separate cam layout looking fairly similar to the JAP. It looked like I could just cut the gearbox off and slide it onto the front of my still-to-purchase Morgan.

On closer inspection the main problem came to light: the ironhead is the same as all Harley engines in that they have a 45 degree V angle with the carburettor on the wrong side of the engine, the narrow V giving no room for a new aft facing manifold between the heads. So I looked into the feasibility of using as many standard Harley parts as possible with new crankcases with a 55 degree V angle giving me enough room to install the carb on the rear of the engine and enabling it to be fitted to a standard chassis.

A mock-up was made and it not only all seemed to work but looked pretty good as well. It was at this point that a few friends, having seen the mock-up photos, asked “what name are you going to give it?”

Much pondering over the internet and the Bulletin followed and one name stood out, that of BLACKBURNE an old name associated with Morgan but not in this format.

A one-off project that was only to be for my consumption, so I guessed I could call it what I liked.

With the help of Performance Projects an engineering design company based at Silverstone owned by an old F1 friend and colleague, the engine was schemed out in CAD and was ready for machining.

The decision was made early on that the best way to go was to machine from solid aircraft spec alloy rather than to cast: this was down to cost as well as accuracy. 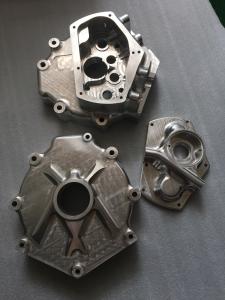 To fit in with the period look I went for a single 1″-3/4 HS6 SU carb, the ignition being off-the-shelf Dynotec Harley with the standard bob weight advance retard with a bespoke rotor for the 55 deg angle. A new flywheel and clutch with a 1″ 10 spline plate was commissioned from Helix Motorsport. I had already sourced a donor engine at a cost of £900 for the first build, providing the following parts cleaned and checked ready for the first build – Heads; Barrels; Pistons; Crank; Cams;  Pushrods and followers. The stock ironhead oil pump has always been suspect, so the crankcases where engineered to accept a newer type sportster pump. With the first set of crankcases back from machining and shot peened, I could start with the assembly.

It was at about this time I came to the conclusion someone else out there may also be interested in one of these engines, only one problem I may have to change my mind on the name as I guessed Blackburne would belong to someone else. A search by myself for the owner of the Blackburne name produced little result so I decided to call in the professionals. Extensive searches at Companies House found no trace of the ownership of Blackburne Engines or the logo, so with legal advice the decision was made to go for it – although I’m still waiting for someone to come out of the woodwork claiming they own the name!

So back to the build, with a few minor mods and tweaks it all went together very well and I made a set of engine plates and a Morgan front end mock-up rig with a L/H Brize starter. With the Blackburne now installed, the day had come. So, on the 6th of June with the sun shining and the birds singing I flicked on the fuel pump and pressed the starter and the lockdown silence was shattered. See the video at www.blackburneengines.com

This brings us up to today and the next chapter,  but I would just like to make a couple of points clear to everyone reading this article that my intention is for this engine not to be a replacement for your lovely old JAP, Matchless or even Blackburne, as I am from the old school that believes that to change anything from the original on a car or motorcycle would be sacrilege. The intention is that if you’re looking for a sporty 60+ hp for that engineless project then maybe this is an alternative.

The next phase of the project will be thorough testing of the engine so I am looking for a Club member with a sporting type chassis who would like to run the Blackburne with the aim of putting on some hard competition and road miles. This would be at NO cost to you and I will work together with you on the installation and pickup any running costs. If this is of interest and you can help with this exciting project, please contact me via the website.

Thanks for taking the time to read this article and if you need any more info or have any comments on this project, I would love to hear from you.

4pm on the last Thursday in the month. Only 5 minutes off the M1 and A50. Lovely pub in a beautiful setting with good food and beer plus an basement room for us (when the[...]
View Calendar
Morgan 3-Wheeler A Buyer’s Guide The August Bulletin is now online and waiting!
Scroll to top