In early August, five Morgan Three-wheelers joined about a hundred and eighty motorcycles for the Broseley Festival of Motorcycling. 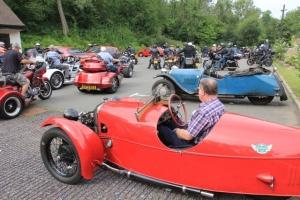 The run started with a steep climb up what was an early hill-climb course from the Coalport Bridge up the side of the Severn valley.  The gradient and hairpin bends were a challenge for Bob’s Derricott’s trike but he succeeded in reaching the top and managed to avoid oncoming traffic. 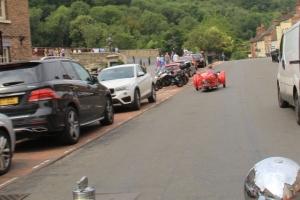 A pleasant run through Ironbridge Gorge and part of Shropshire, with many locals turning out to wave us past, ended in a takeover of Broseley High Street, which was filled with bikes and trikes of all ages. 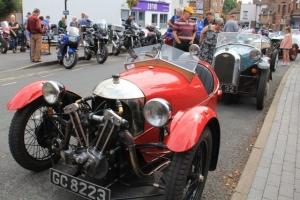 Over £750 was raised for the local Blood Bikers and Community First Responders by this very friendly and well-organised event.

Normally meets on the third Tuesday of every month but contact the Group Organiser if you want to confirm.   Click here to find out more about the group.
View Calendar
Membership Renewals 2019/2020 AGM Weekend Breaking News
Scroll to top